This neighborhood was once part of the Western Baptist Theological Institute, which was founded in 1840. The Institute lasted until 1855 and the buildings were sold off and houses were built. The area became a desirable place to live because of its elevation and distance from the Ohio River. Many of the homes were built in the 19th century and have since been updated for today’s lifestyles. Listen to an audio overview of Old Seminary Square here from cov200tour.com.

Public Art Old Seminary Square and Westside have some lovely and unusual examples of public art.

14. Einstein Mural (1132 Lee St.) The artist duo known as Higher Level Art has graced a number of Covington walls with murals, including this one of Einstein on the side of Wunderbar restaurant.

15. Fruit Tree Sculpure (321 Orchard St.) Artist David Rice created this piece as the kick-off to a planned sculpture garden in an empty lot on Shotgun Row on Orchard St. in what is technically Westside neighborhood. Rice created the fanciful Fruit Tree as a reference to Orchard Street’s actual past as part of an orchard. 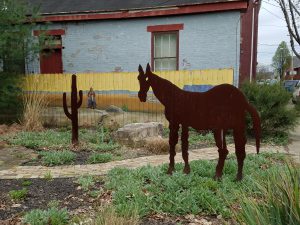 16. Henry Farny Art Park (Banklick & Robbins St.) Henry Farny was a well-known artist who lived in this neighborhood from 1890-1907. The park was created to honor him. His work often featured elements of Native American culture, referenced by much of the art in this park. Farny’s painting “The Song of the Talking Wire” hangs in the Taft Art Museum.  The sculptures in the park are by artist David Rice. The central piece, a circle with a dot in the center, represents the symbol for Farny’s Native American name, Long Boots. Farny signed all his paintings with both this symbol and his name.

17. Mosaic on Underpass (8th & Russell St.) As you walk south down Russell St. under the railroad overpass there is a rock garden, called Interpose. On the other side of Russell, there is a small mosaic installed on the wall of the underpass. It depicts a Fibonacci spiral.

18. Rock Arch (305 Orchard St.) Not much is known about this rock arch that joins two buildings on Orchard St., except that it was made from local stone.

19. Westside Mural (798 Russell) The mural painted on the building at 798 Russell was designed and painted by the Westside Action Coalition Neighborhood Association.

Architecture and History There are many historic homes in this neighborhood, but we are featuring just one:

old photo of the Ashbrook

7. The Ashbrook (1010 Russell St.) This home was built in the 1860’s by William E. Ashbrook, the Sheriff of Kenton County. The 5,300 sq. ft. building had been broken up and used as offices. It is now a private residence and the owners have plans to turn it into a bed & breakfast. 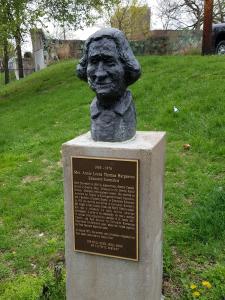 1. Annie Hargraves Park (Chesapeake St.) Annie Leona Thomas Hargraves was a local teacher, journalist and Park Director of Covington Recreation Department. She helped to organize this park, which is now named after her. A grant has recently been received to upgrade the park’s facilities.

2. Urban Farm (Orchard St.) This small neighborhood farm in the Westside area includes a flock of chickens, whose eggs are sold at the farmers market.

3. St. Mary’s Park (1125 Madison Ave.) Accessible on foot from Old Seminary Square neighborhood by walking across the 11th St. bridge and turning right on Madison, this park is located next to the Catholic Diocese office. It was recently completed and is intended to provide an urban oasis, from which the dramatic architecture of the Cathedral Basilica of the Assumption can be viewed.

Restaurants Click on the names below for more information about each.